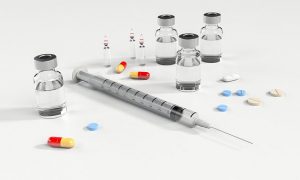 As the opioid crisis expands across the country, leading to more and more deaths, governments and health professionals are looking for ways to not just treat addiction, but to prevent it.

The effort has led to doctors’ offices, where physicians for years have been prescribing opioids for chronic pain. As experts concluded that opioid treatment often causes patients to turn to street drugs, they began to also look at acupuncture and other alternative treatments for pain.

The process is slow.

Twelve states have examined whether to include acupuncture as a pain treatment that Medicaid will pay for. Some of them decided the studies were not conclusive. Many state legislatures have failed repeatedly to pass laws that would list acupuncture as an insurable treatment for pain. Although the Affordable Care Act does require insurance companies to cover acupuncture treatment, Medicare does not.

Proposals to include acupuncture as approved pain treatment often are countered by old questions about whether alternative medicines actually work – despite volumes of research studies to the contrary. Of course, many western medical doctors are unfamiliar with acupuncture and other alternative medicines, even though hospitals more frequently include them in modern recovery protocols.

Education does pay off

As Consumer Reports in a story on insurance, a pilot program run by Excellus BlueCross BlueShield found that educating doctors about a restrained approach to back pain created change. The program discovered that when patients were prescribed alternative treatments, costs for imaging, surgery, visits to specialists and emergency rooms, and opioid prescriptions all decreased.

And no one should doubt that opioid use is a crisis. A about non-pharmacological alternatives to opioids published by the National Academy for State Health Policy reported that:

Nearly 1-in-5 American adults suffer from chronic pain, and long-term opioid regimens have become increasingly more common as a treatment for non-cancer pain.

The evidence base for or against non-pharmacological alternatives will become more robust as more Medicaid agencies implement programs encouraging the use of these services.

Here’s what you can do

Write or talk face-to-face with your legislators about acupuncture as a useful tool in pain treatment. Point out the issues with long-term use of opioid drugs.

Join a program to educate state legislators about the efficacy of acupuncture. Enlist your patients in the effort. Medicaid and private insurance in every state should include acupuncture as a viable alternative to opioids.

Educate influencers. Not every research paper on acupuncture is medically robust. Some involve too-few patients or don’t compare against control groups. But there is enough published research confidence to show acupuncture is an effective treatment of pain, with few or no side effects. Acupuncture, by the way, can also help recovering addicts by treating nausea, fluctuation in body temperature and anxiety.